I’ve been doing the ten album covers in ten days thing on Facebook, and thought I would put the last, short text, on here, bearing in mind the FB readers aren’t all au fait with Snow’s oeuvre. Imgae below.

Michael Snow (1931) is a Canadian artist who works in a full range of media; painting, sculpture, photography, video, book-works, writing, music and film, for which he is most well-known. He’s the opposite of a multi-media artist, however, since he has always insisted on the specificity of the various media he uses, and these specificities are often what the work is directly about. To this end he has never allowed his most famous film Wavelength (1967), to be seen other than in its original medium of 16mm. His work is invariably and explicitly concerned with its relationship with the spectator, or listener in the case of Musics for Piano, Whistling, Microphone and Tape Recorder (1975). Thus the last of the three tracks on this double LP: ‘W in the D’ is about microphones and how they work, in which he whistles into the microphone whilst moving it slightly in relation to the airstream issuing from his mouth. Consistent with his artistic approach is the album cover. The normal distinction between front and back, image and ‘liner notes’, is effaced. Instead the gatefold sleeve is conceived like a four-page book or booklet, though it is unlike either of these on account of its size and weight. The text addresses the reader directly asking her/him, for example, please to not read the notes -really a rambling essay- while listening to the records. The first of the four ‘pages’ reproduced here in place of the ‘cover image’, gives a flavour of the text. There’s a connection to his 16mm film So is This (1982), which is composed entirely of a long text presented word by word, which similarly addresses the condition of the viewer, among other things. His tone is jocular, he likes puns and word play, but there’s always a serious question lurking just behind, in this case relating to the way attention is divided by sound and image when one is watching a film, for example, or the nature of the different modalities of reading and listening. This double LP, which doubles as a fine conceptual artwork, is a facsimile (necessarily) reissue on the Song Cycle label of the original Chatham Square release. Didn’t make the cut: Snow Solo Piano Solo Snow. (3 CD survey of Snow’s piano music. Before he became an artist, he worked professionally as a graphic designer and a pianist, and he continues to play piano and trumpet in his band CCMC, which also features John Oswald of Plunderphonics fame. Their album Volume 3 was re-released in 2013). 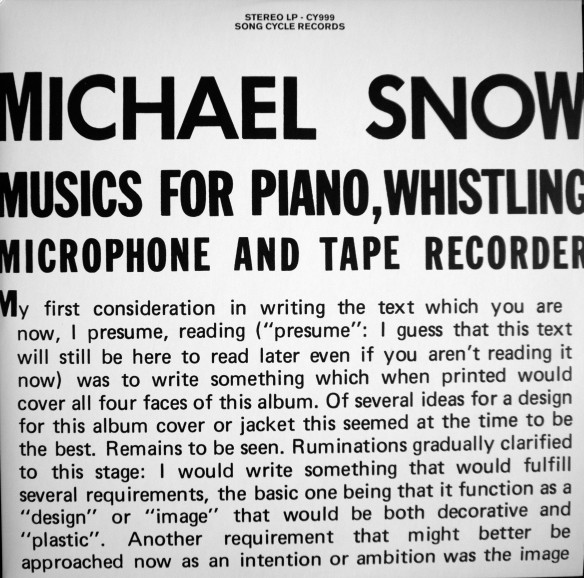