This is the text written by myself and Neil Henderson for a joint screening the third of four such events, curated by Simon Payne, Andrew Vallance, Amy Dickson and Jamie Jenkinson.

Nicky: I came across a quote by Lucien Freud in which he said that the longer you look at something the stranger, but also the more real, it appears. This seems to me to apply to the experience of watching your films, specifically the ones shown here as well as others, and is something that I think our work has in common, among other things. Much of our work is observational, but the seemingly banal process of extended observation leads to mysterious, because unresolvable, features in the interplay between what is shown and how. The simple shot of a landscape becomes spatially complex and difficult to gauge, in the process of which one starts to question one’s perception. (Some of James Benning’s films also do this). This questioning of perception has been a paradigmatic aim of experimental filmmaking, but I particularly like the way your work challenges photographic naturalism -filmic veracity- on its own ground, rather than, for example, trying to do it by over exposing, blurring or de-focusing the image or degrading it in post-production, not that these strategies can’t be productive.
I also like the transparent economy of means in the work. One is struck, in contrast, by the gross wastefulness of big budget cinema. Twenty-four very expensively made photographs are discarded every second at the Cinema. These frames together form sequences of images that are barely noticed, glimpsed in the onward rush of narrative momentum. Even so-called slow cinema chucks a lot of material away before one has had time to consider it, because it is almost never concerned to facilitate unpressured or open-ended looking, the kind one would direct at a painting, but always at some level with the forward momentum of narrative and the distracted mental dispositions that generates. Your films are not like that: they give us something to look at which is what it is, and they give us enough time to do this, by for example, returning repeatedly to the same place in different conditions, which alters the apparent spatiality of a landscape.

Neil: The long takes, lens focused, static camera, I really like the clarity of that: ‘this is what I am saying’. I don’t think I ever really experimented with blur, over-exposing or focus, and I agree they can/have been important approaches across the history of experimental cinema. I think those devices are about distancing you from the image, which I’m not so interested in. I love that Brakhage made a load of out of focus films but have never been able to bring myself to do it.

The films I’m showing for this screening feature a lot of time-lapse. I think this is a really hard technique to master. You use it really well. In your film Object Studies, that sequence where we see the movement of shadows in foliage and trees (it’s in b&w), it’s amazing, and so simply made but what we see is incredible. The way the shadows are animated. I think it’s hard to use because it’s something we associate with natural history programmes.

I shot a number of roles on the Isle of Grain for this film, there’s lots of de-industrialisation going on there and I’ve been using the old forts in the Medway as a place to leave the camera for a few days. The footage comes back from the lab though and you wonder why you bothered. The film tells you nothing you don’t know, time passes, the sun comes up and goes down etc. What are your thoughts on time-lapse and experimental filmmaking?
—————————————————————————————————
Nicky: I am a semi-closeted documentarist. It stems partly from my period working at the BBC where I was an assistant film editor on several documentaries. At the time I made a conscious effort not to be drawn into the cosy institutional culture –mid 80s, before Mrs Thatcher changed it forever- but unconsciously I must have absorbed a lot. Anyway, as many people have pointed out, all films are documentaries at some level. Time-lapse extends the possibilities of documentary to the recording of time in a way analogous to that of how lenses of different focal lengths extend or distort the space in front of them. One could think of time-lapse as being like a tele-photo lens that compresses time. It extends perception beyond the normal human range. In this sense time-lapse is a perfect example of Walter Benjamin’s ‘Optical Unconscious’. It’s scientific and surreal, like the early time-lapse films of plants growing. You see that in Object Studies when dead matter writhes in the growing heat of the day. (Actually I am not showing Object Studies on this occasion, but Gasometers 4 and Polytunnels, but it’s a similar work in many ways –same location and time of year, some time-lapse sections, etc) The first time-lapse film of any kind I saw was Raban and Welsby’s River Yar (1972), which was shown at Reading Museum and Art Gallery when William was an MA student at Reading University. I think I struggled to escape his influence for many years, so didn’t do much time-lapse for a long time, but then I realised that it’s not a particularly crowded field and any way most time-lapse films aren’t very good, most egregiously Godfrey Reggio’s Qatsi trilogy, which mostly spectacularises and glosses with some hippy philosophising. In the Gasometers series the structures are a pretext for making films about light, but I was also conscious of the fact that National Grid were about to demolish them, and now only the pair in Gasometers 4 are still there, or were last time I looked.
—————————————————————————————————

Neil: I think Raban and Welsby really own this area in experimental cinema, so I can see why you struggled to escape it (I think you do though), but yes as you say, there aren’t many. Emily Richardson seems like someone who has found something to say with that technique. I like that idea, the analogy with time-lapse to different lenses. One of the films I’m showing is a 10 min time-lapse of a man-made island in the Wash. The time lapse reveals its workings, the birds that live there, etc. It reveals something in this landscape very few people have ever seen.

This film of the Isle of Grain I’m showing will complement your Gasometer film very well. I’ve been thinking about the Freud quote you started this dialogue with, and I’ve decided to show a 10 min unedited view of this location on Grain. I was planning on cutting a lot of time-lapse footage against it but I think this will be better. This dialogue has helped clarify what I’ll show.

When I started shooting on Grain, just before the referendum, there were UKIP posters everywhere saying ‘Leave’ and ‘Out’. Just after the referendum a gang of lads went out to the fort and covered it in England flags. I was planning on leaving my camera out there for some time lapse work for a few days but thought better of it. The film of Grain I’m showing, in the context of all this, has become weirdly political, which is not something I had ever thought it would be. 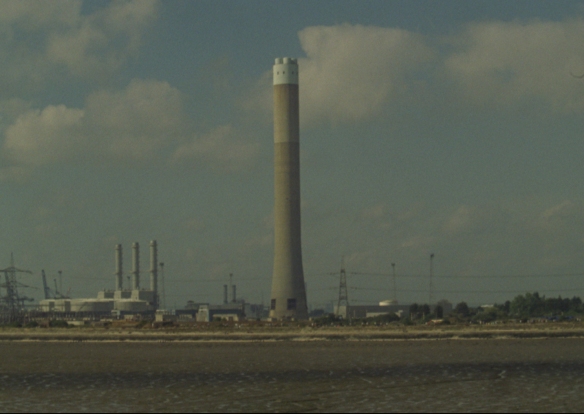