Some images from Neil Henderson’s film event Black and Light Movie, 2001, 5 minutes, for 50 Super 8 projectors and a few Standard (Regular) 8 projectors too. Neil presented the film several times over the weekend of the 2nd and 3rd of February, as part of the show: Film in Space, an Exhibition of Film and Expanded Cinema, held at at Camden Arts Centre, London, and selected by Guy Sherwin. This was one of a number of events that have augmented the exhibition, which runs until February 24th.

In previous presentations of this work, Henderson arranged the projectors on a double bank of Dexion shelves. Although the projectors are arranged in an orderly fashion, they are angled at the screen so that the frames vary in size and shape, overlapping in a variety of configurations. At Camden the arrangement was completely different, in that Henderson made use of the floor and a spiral staircase in the room. The film is delightfully paradoxical in that all the projectors are loaded with black leader. They are turned on and for some time we see only the light from the projectors’ lamp housings and listen to the whirr of the fans and motors. After a while the films start to run out, releasing skewed, superimposed rectangles of light onto the screen. When all the films have run through the projectors are turned off. Thus the piece poses a number of questions, such as when and where is the “film”, is it a film if there’s no “image”, is the rectangle of light an image? And so on. It is quite a pure time based work, in that we are waiting for some while for what we know will happen, but equally it’s very much a work of light and space. These photos were taken at the first presentation. For the second and final one, the take-up spools were removed from the projectors so that the film snakes onto the floor, while  dangling and dropping from the machines on the staircase. Apologies for the blurriness of the last picture, in which Henderson can be seen on the right. 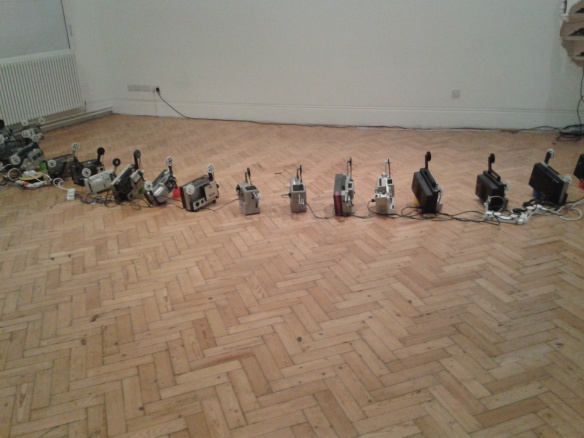 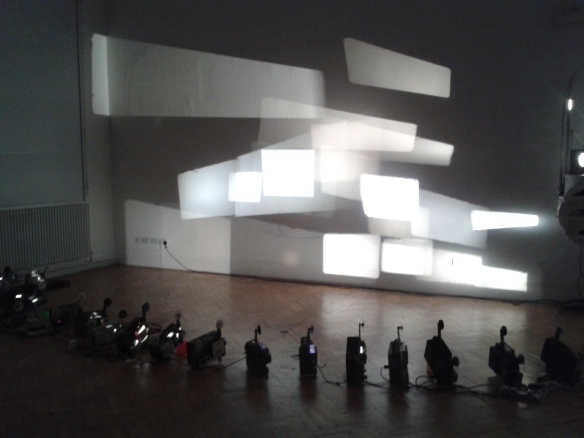